(This blog post forms part one of two pieces describing Jenny and Lydia’s recent trip to Malaysia and Indonesia, as a component of the 11 month NERC-funded Innovation Follow-on project: Decision support for restoring ecological networks in rapidly developing, biodiverse countries.) 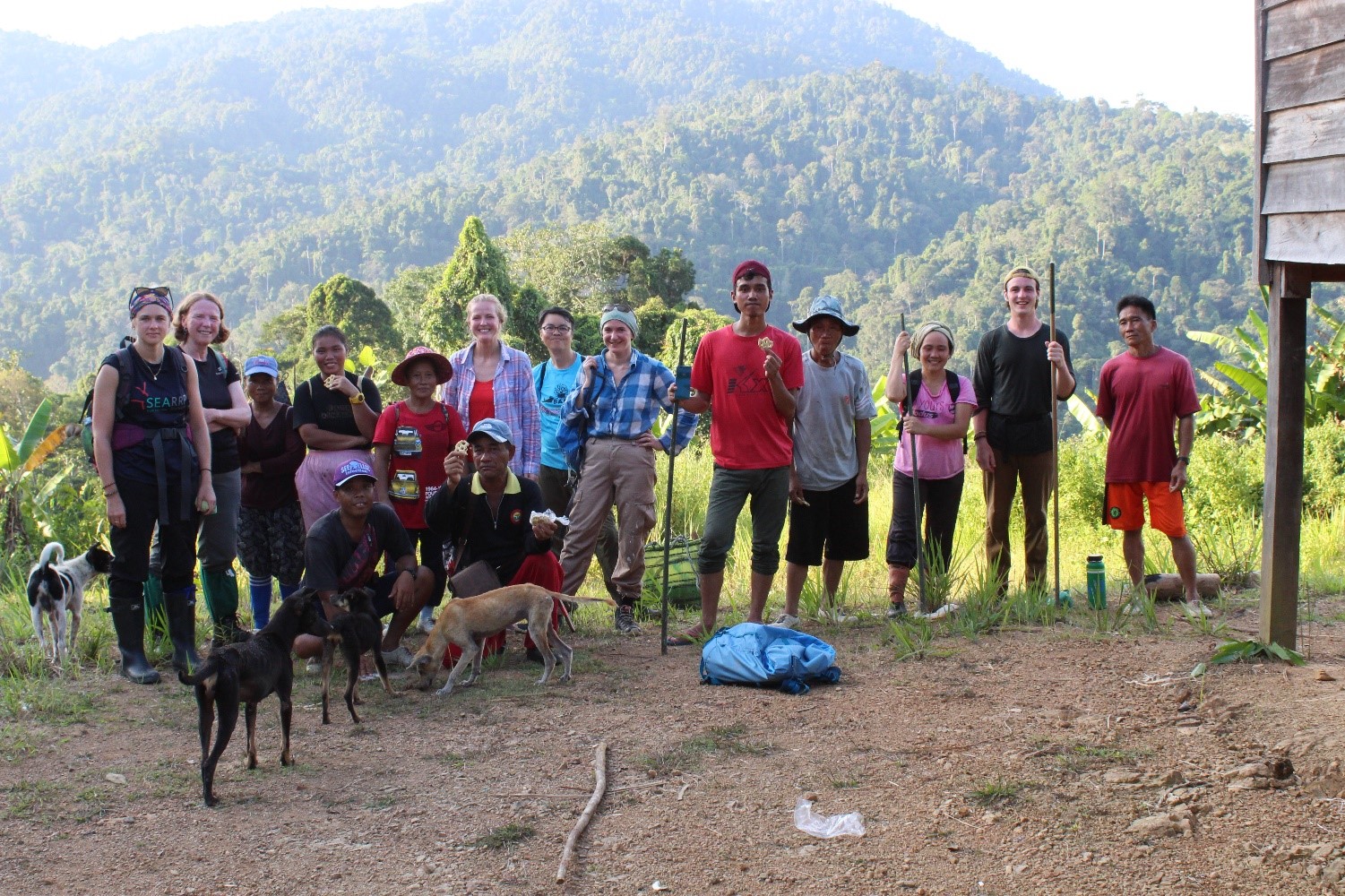 The kind residents of Kampung Sikalabaan, in Sabah’s Heart of Borneo region, showed us around their community forest and farmland for the day.

Whilst everyone was sweltering under abnormally tropical temperatures in the UK during July, Jenny and I were enjoying a relatively temperate time in the Tropics. We spent the majority of the month in Malaysia and Indonesia, visiting the partners and landscapes that are involved in our NERC-funded project: Decision support for restoring ecological networks in rapidly developing, biodiverse countries. Ghana is the other country involved in the project, which we had the privilege to visit back in April (reported on here). This time, road trip around Southeast Asia!

Our travels started with a stop-off in Kuching, Sarawak, to attend the Association of Tropical Biology and Conservation’s (ATBC) annual meeting, entitled Linking Natural History and the Conservation of Tomorrow’s Tropical Ecosystems. It was a fascinating five days, attended by a huge range of nationalities talking on a similarly wide variety of topics. Jenny presented on Condatis and I on the long-term ecology of tropical peatlands (another passion). Many of our collaborators were also there presenting, including: Professor Jane Hill and Dr Sarah Scriven from the University of York, and Dr Jed Brodie and Dr Sara Williams from the University of Montana. And we made some useful contacts for the Condatis project, as my new collection of business cards testifies. 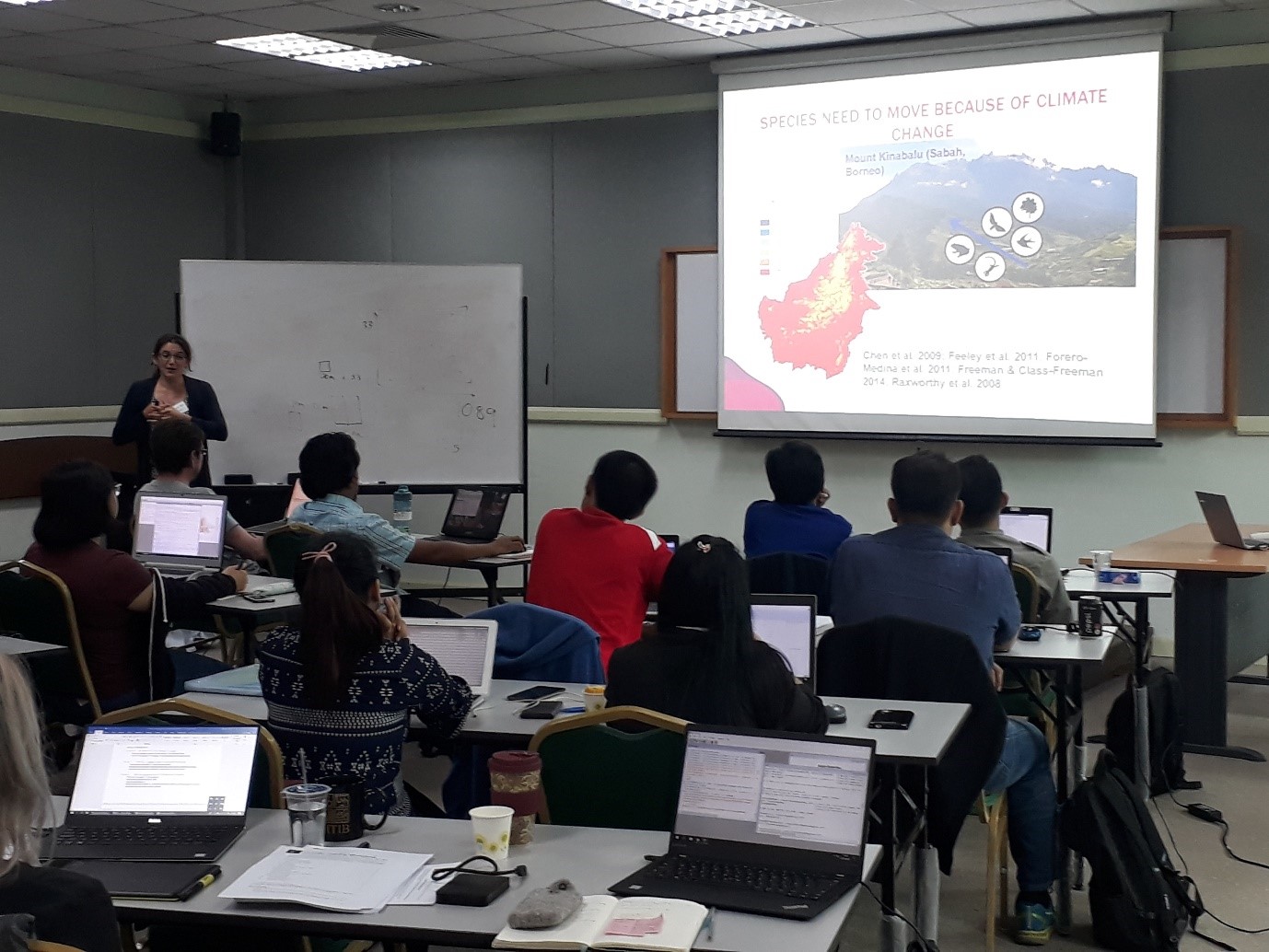 Jenny presenting the concepts of Condatis to the participants of our training workshop at Universiti Malaysia Sabah (UMS).

Just hours after the closing ceremony of the conference had finished (and the after party was likely still in full swing!), we flew on to Kota Kinabalu in Sabah. In order for us ecologists to understand the human-component of the forested landscapes in the region, we were extremely fortunate to be invited to visit several different communities with  PACOS Trust (an inspiring charity supporting indigenous communities in Sabah). So the next morning, five of us, equipped with walking boots and mosquito nets, headed upstream, into the Heart of Borneo. 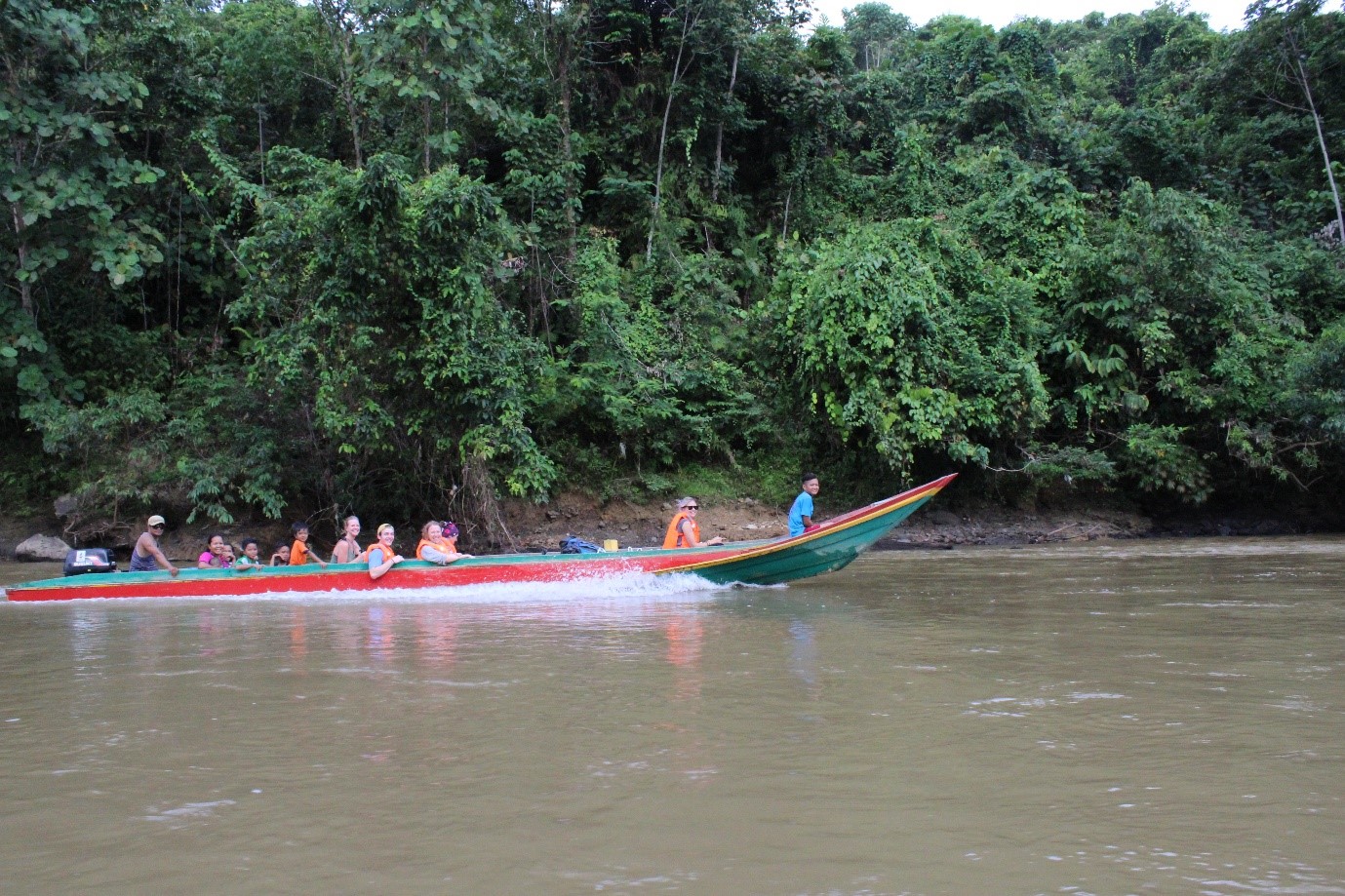 Travelling by boat to the village (kampung) of Sikalabaan, about two hours up-river from Kampung Salong, where the road ends.

We spent three nights in the “cultural house” of Kampung Sikalabaan, along with a dozen other men and boys who were visiting in order to attend training on how to fix boat motors, organised by PACOS. These communities rely on mechanised boats to travel between villages, to school, to obtain provisions and to generate an income; with replacement parts for engines being so expensive, it is important that people know how to fix them. PACOS offers training courses for members of indigenous communities across Sabah, on subjects ranging from how to plant chilli peppers, fix broken machinery, to how to make soap, with the aim of improving their capacity to sustain a low-impact livelihood in the often remote locations they occupy.

We spent one incredible day observing how members of Kampung Sikalabaan use their forest and its plethora of resources. Members of seven families led us patiently (we were significantly slower and less agile than them, despite the laden woven backpacks they were carrying!) through the jungle to their farms, laid out in forest clearings. Along the way, they stopped occasionally to harvest wild ginger or check on a small vegetable plot they’d established, apparently opportunistically, within their community land. Early afternoon, after walking upstream/in-stream for quite some time, we stopped for a spectacular picnic: out of their woven baskets, the women produced a feast for the twenty or so of us, with freshly boiled rice, freshly picked aubergine broth and then to top it off, they caught and we cooked freshly-netted fish from the flowing waters two feet away. Beats a Sainsbury’s sandwich. 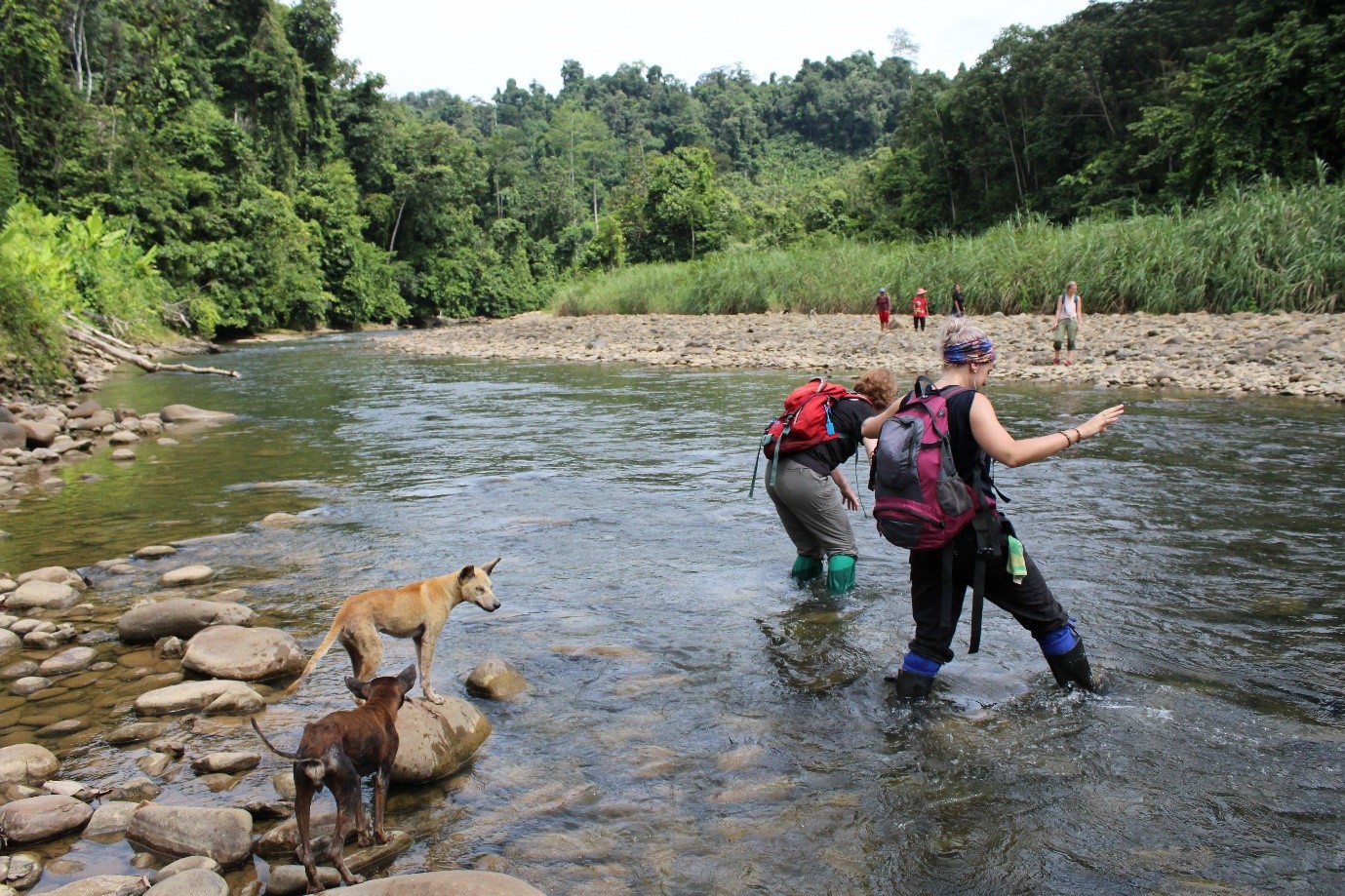 The first river crossing. We didn’t realise there were about a dozen more to come. Each time it was so refreshing to wade through thigh-deep water; a welcome relief from the tropical humidity. Thankfully my camera avoided any refreshing dips though!

It was a privilege to see how this community so expertly uses their land, and how important it is for them to have access to the forest and its resources. With rural-urban migration and the designation of ‘communal lands’ providing opportunities for the expansion of oil palm into these areas, as well as pressures on resources and disturbance to ecosystems from logging, industrial agriculture and mining, these community-owned lands are being compromised. The Government’s goal of expanding strictly protected areas across more of its forested asset adds another dimension to the challenge of maintaining indigenous communities in these landscapes. But more discussion on this complex issue will have to wait for a future blog! We thank PACOS and SEARRP (Gordon, Angie and Agnes in particular) for organising this insightful opportunity.

Leaving the forest and returning to Kota Kinabalu was a bit of a shock, though the washing machine was welcomed! The next day we headed into the Forestry Complex at the Universiti Malaysia Sabah (UMS) campus for two days of training. We had 20 participants attend from a range of backgrounds: in addition to UMS students and lecturers, people attended from the Departments of Agriculture, Irrigation and Drainage (JPS), Forestry (SFD) and Environment Protection (JPAS), from WWF-Malaysia and SEARRP. The first day was led by Dr Sarah Scriven and introduced participants to the R program and how to perform basic analysis and geospatial data processing. The second day, led by myself and Jenny, introduced the concept of Condatis, followed by an interactive session where we guided people through performing their own analyses using the new web version of the tool. (Butterflies (rama-rama in Malay) were used as the study organism; Jenny’s favourite!) Though we were a little optimistic as to how much material we wanted to cover in two days, it seemed to be a success: our participants provided positive and useful feedback that we used to improve and refine our training workshop the following week in Indonesia.

With our fascinating range of meetings and field trips complete in Malaysia, we headed for the next stop-off: the island of Java.

For the second episode in our Southeast Asian adventures, click here.

Condatis is a user-friendly, open source program, which is available to anyone.

To find out who is behind Condatis click here